7 Resources for Researching your Ryan ancestors

In this post, we want to announce several new resources that have been made available to project members to help you research your Ryan ancestry, in particular a new family tree on Ancestry and the Extensive Lineage Project.

One of the main goals of the DNA project is to help you with your own Ryan research. This could involve connecting you with cousins in Ireland, or pushing your ancestral line back an extra generation or two, or finding where your earliest Ryan ancestor came from (maybe even the house in which they lived), or connecting you to the history of your surname origins and a specific Ryan clan or family branch. Or a combination of all of the above.

We have an array of resources that are focussed specifically on this particular goal and below is a summary of seven of the most important ones. We start with the most recent initiatives - hopefully these will help many of you make new connections to your Ryan heritage.
1) the Ryan DNA Project Family Tree (on Ancestry)
Many people have published their Ryan ancestral lines on our Post Your Pedigree page and this is a very useful resource that can be used by any member of the general public - simply by searching the page (Ctrl+F on PC, or Cmd+F on Mac) for your earliest known Ryan ancestor, you may find distant cousins there who have already taken a DNA test.
To accompany this resource, we are building a family tree (with all the published pedigrees) on Ancestry, simply called Ryan DNA Project Family Tree. This is a public tree but all living people will be private. This is an ongoing project and a big thank you to Derek and Jamee for spearheading this task. 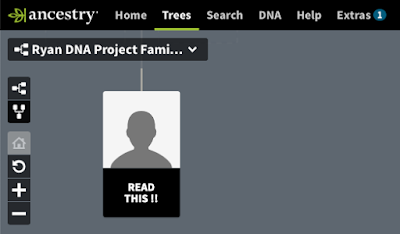 In addition to including the pedigrees of project members, we will include the Ryan pedigrees noted in O’Hart's Irish Pedigrees as well as extensive pedigrees that are in the public domain. Some of these have been sourced from the William O'Ryan archive (to which Derek Ryan was able to get access following discussions with his family), including:
Some of the above pedigrees go back to the 1500s and it would be really important to try to characterise the Y-DNA signature of each of these family branches.
Thanks go to William's children, Rick and Josephine, for allowing access to his archive. Josephine runs the facebook group O'Ryans of the World Unite.
2) the Extensive Lineage Project
Linked to the new family tree on Ancestry is the Extensive Lineage Project. One way that DNA can help you push back your own Ryan ancestral line is to connect you genetically with people who have extensive lineages that go back much further than the usual Irish family tree (which typically runs dry around the 1800-1830 timepoint).
As mentioned above, some of these pedigrees (verified by documentary evidence) go back to the 1500s. We plan to target descendants of these extensive pedigrees, test their Y-DNA (Y-37 first, then Big Y) so that their precise Y-DNA signature can be characterised. Then, anyone who is a close enough match to these Y-DNA signatures can "piggyback" onto the extensive lineage and jump backwards in time to the earliest known ancestor on that extensive line. There may be several generations missing between you and the point where you connect to the extensive lineage, but at least the DNA will have confirmed that your particular branch definitely links up to it.
Thus, DNA could help you jump back several centuries in time on your Ryan ancestral line. 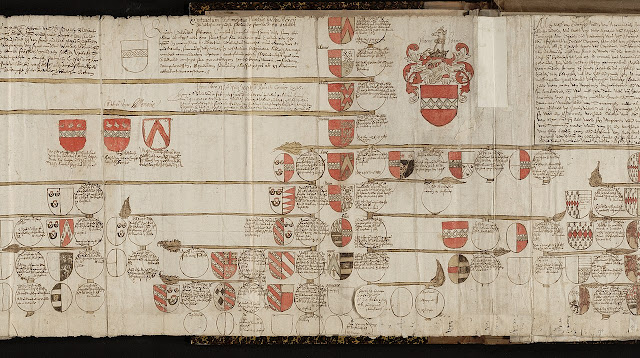 To help this initiative, we are putting out a public appeal: are you a Ryan with a detailed pedigree (documented and proven)? does it go back to at least the 1700s? If so, please get in touch with us so we can add it to the family tree on Ancestry.
If your Ryan pedigree goes back into the 1600s (or earlier), we would like you to consider doing the Big Y test. Everyone who participates in the Big Y test will be making an invaluable contribution to tracing the genealogical history of the Ryans. This is the best way of characterising the Y-DNA signature of your particular line. And because these extensive pedigrees are potentially of great value to ordinary project members, the project is hoping to subsidise some of the Big Y tests. If we buy them during one of the frequent sales, we will take advantage of the Sale price (usually $100 cheaper) but also, we would hope to subsidise $150 towards the cost of each Big Y test. This could reduce the cost of the Big Y test to a $100 or less.
In order to do this we need financial support in the form of donations towards the General Fund (which currently stands at $150). So if this is something that you would like to see happen, please make a donation (of any amount) via the following link.
If we get enough of these extensive lineages tested, we should be able to determine when the various branches split apart, and which branches are more closely related to each other. We might also be able to determine if the Ryan's of Tipperary are a separate clan to the Ryan's of Carlow.
So please donate to the General Fund - it will help us help you.
3) the Ryan Clan Association
Following a very successful virtual Gathering in Feb 2021, the decision was taken to form the Ryan Clan Association. The over-arching aim of the Association is to be a guardian of Ryan heritage. We hope to organise a regular Clan Rally (either physical or virtual), provide resources for people researching their Ryan roots, build and preserve an archive of material related to Ryan history, and initiate and/or support heritage projects of relevance to the Ryan Clan. To achieve these longer-term objectives, the Ryan Clan Association website has been set up as well as a dedicated Facebook group to encourage social interaction among Ryan's worldwide. The website already has some interesting articles about the origins of the Ryan Clan and whether we are dealing with one clan or two - see here. 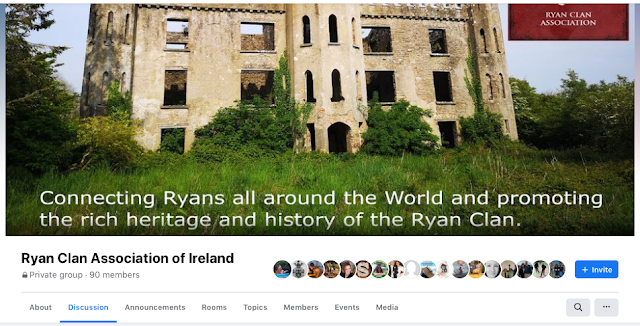 4) the Facebook group
The Ryan Genealogy & DNA Forum was launched on Facebook in Jan 2018 and now boasts over 1400 members. This is a hugely popular group and new members are joining every day. It is a great place to ask genealogical questions, share information and find Ryan DNA matches. Many people have made connections with distant cousins in this way and have received information that they might not otherwise have discovered. 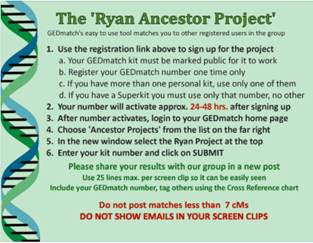 6) the Ryan Sharesheet (via the Facebook group)
The Ryan ShareSheet summarizes general information for members’ ancestors, including their Ryan family nicknames and their ancestral origins. The ShareSheet is updated weekly and is available for viewing to all members of the Ryan Genealogy and DNA Forum. Have a look - you may find some of your ancestors there. Instructions for accessing the share sheet are on this link here. 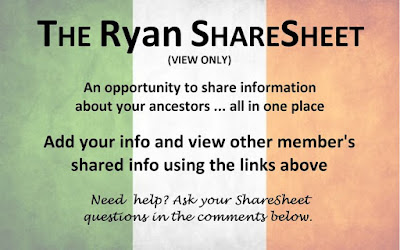 7) the Ryan Nickname spreadsheet
The Ryan surname is so common in Tipperary and the surrounding areas that many families were known by a nickname. These can be very helpful in finding where your particular Ryan family came from. Derek Ryan has compiled a spreadsheet with over 500 Ryan nicknames discovered thus far. This is updated on an ongoing basis and can be accessed via his blog post here.

The Ancestor Project and Ryan Sharesheet are all coordinated by the incredibly industrious Jamee Ryan Carlin. Derek Ryan runs the Tipperary Antiquarian website which is a great source for the rich archaeological heritage of Tipperary.

We hope you find these resources helpful. The new initiatives are particularly exciting and we will be posting regular updates in the Facebook group as well as here on the blog.
Happy Hunting!
Maurice Gleeson
Derek Ryan
Jamee Ryan Carlin
May 2021
at May 29, 2021

FTDNA recently introduced a new feature that Project Administrators have been asking for for quite some time. It is called the Group Time Tr... 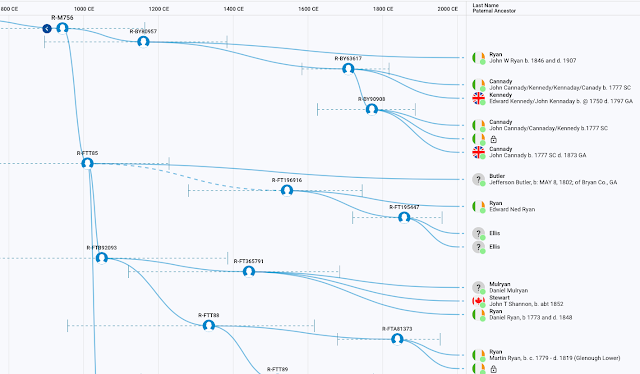 What's on the Menu?

Maurice Gleeson
I am a genetic genealogist and run Surname DNA Projects for the following surnames: Spearin, Farrell, Gleason, Boylan, O'Malley, and Ryan. I am Education Ambassador for ISOGG, organise the Genetic Genealogy Ireland conference each year in Dublin, and have a blog and a YouTube Channel, both called: DNA and Family Tree Research.